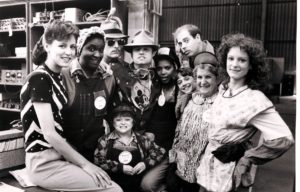 We lost a great talent in the film business a few weeks ago. Jonathan Demme. Jonathan had a big influence on me when he was on the verge of breaking out. He had pushed past his early Roger Corman years. When we met, Melvin and Howard had just been released and was considered a gem. He was just finishing a rough cut of Stop Making Sense.

I was still doing more Equity Waiver local theater (translation: acting for free) than working in film and television. Jonathan and I loved the video game Defender and its sequel, Stargate. We would play and Jonathan would give me advice on show business.

Time has proved his ideas to be absolutely true. Here are some of Jonathan’s insights .

On directing. Jonathan said directing theater and film are different. In theater you have to get all of the actors to the same place at the same time: in top form on opening night. That means you have to speed up and slow down some actors during rehearsal. Directing a film is about managing crisis. There is always a nasty surprise waiting around the bend. You have to improvise.

In preparing to direct a film, study the script and work from the transitions out. In other words, visualize how you want to connect scenes. With an image. With a camera move. With a sound. Then you can develop a visual language to tell the story.

Most importantly – (he said with great emphasis) when you direct – sit down. It is a long day. It is easy to expend nervous energy by walking around. Don’t. Sit. Drink water. Rest whenever you can.

Addendum to Jonathan’s observations. I am currently working on the wonderful One Day at a Time for Netflix and Sony. When you do a sit com, you must pace yourself as if you are doing a stage play. You have to arrive at your performance on opening night. Which happens to be the only night. Shoot night. Nothing else matters.

Jonathan was right about many things but especially to sit down. No matter where you go – it’s a long evening.